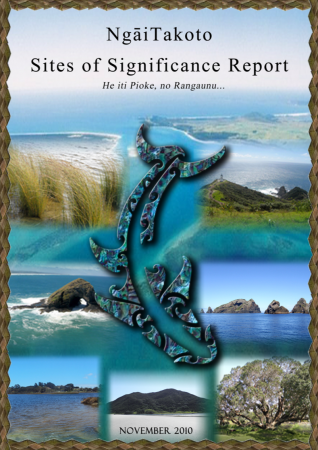 This report is an overview of the NgāiTakoto Land Claims which began in 1986. The summary of NgāiTakoto sites of significance is to provide a snapshot of the lands and specific places that we of NgāiTakoto can identify with and relate to, and to provide to our NgāiTakoto people a visual library of information that brings to life our NgāiTakoto expressions of Mana Atua, Mana Tūpuna, Mana Whenua.

This sites of significance report has been a significant collaborative excercise and the Ng!iTakoto Negotiations Team extend a very special and whole hearted thanks to Dr Grant Young of The History Workshop Limited and Massey University, Stuart Halliday of Geospatial Solutions Limited who prepared the maps included in the report and Professor Michael Belgrave of Massey University who contributed by providing advice on the oral history project and dealing with ethical issues connected with the interviews.

Other representatives of NgāiTakoto marae on the Negotiations Team who have worked on the report are Whare Mehana, Robert Tamati and Dixie Tamati from Wharemaru (Kaimaumau) and Mete Norman from Te Paa A Parore. Mangu Awarau, Whare Mehana and Mete Norman were the kaumatua for the project who provided authoritative advice on tikanga, on NgāiTakoto traditions relating to the sites included in the report and translation services to assist the interviews.

The oral history project was an important feature of this report. Much of the land in the NgāiTakoto rohe was alienated in a small number of transactions which commenced in the late 1830s and were finalised by the mid-1860s. These transactions included a number of old land claims, two Crown purchases and two private purchases. NgāiTakoto were left with three small blocks of land at the southern end of the Rangaunu harbour. In consequence of this land loss, there is very limited documentary evidence dealing with NgāiTakoto and the relationship to their lands. Whereas elsewhere witnesses presented detailed evidence of their kinship groups’ relationship to the land which was recorded in the minute books of the Native Land Court, or in other documents, NgāiTakoto have no such body of documentary evidence to draw on.

An oral history project was therefore essential to the preparation of this report. The Negotiations Team and the Researchers wish to thank all those who participated in the project and contributed with information and provided ongoing support. The admin staff at the NgāiTakoto a Iwi Research Office, particularly Alan (Kaio) Hooper, Denice Gillespie and Tamara Matiu, who organised hui, liaised with interview participants (Kaumatua-Kuia), and who responded to any and all requests in a committed and efficient manner. Their efforts are greatly appreciated. A very special thank you to both Hinemoa Awatere-Murray and Moka Apiti of the Crown Forestry Rental Trust who were instrumental in the design and implementation of the project and provided significant ongoing support to the Negotiations Team and Researchers. We gratefully acknowledge their contribution and that of Crown Forestry Rental Trust to the production of this report.